After our day, well not a whole day but four or five hours in Cardiff we had a chill out day. A man can only walk around so many shops.

Another thing on my to do list while in this part of Wales was to visit Taff’s well, a small town just north of Cardiff. Taff’s well was where my dads parents lived after moving out of the farm they worked up in the hills. I used to go there as a kid to visit them and still have memories of the house and my gran and grandad living there. I remember my gran making welsh cakes and my grandad letting me do toast on the open fire by putting the bread on a long fork and holding it near the fire, it tasted so good. They are long gone now but memories still live on. I think the last time I was there was in 1977, I have a old photo somewhere of me and my car, a 1966 VW beetle parked outside the house. It’s only about a 25 minute drive from where we are staying so off we went. No problem finding it because I had looked on google street view beforehand.

The town of Taff’s well had got a lot busier than I remember with new layouts on the road etc. But the house was still standing and looked exactly the same from the outside as it had all them years ago.

The front door which behind have so many nice memories.

Our next trip out from Tredegar was to go and visit friends in Porthcawl further along the coast. Friends we met through the VW scene. Ant and kath and there two kids who are now 13 and 9. The eldest Elliot was only three or four when he used to come to the VW shows with mum and dad and I always used to buy him Haribo sweets. Aimee was just a bump In mums tum at one of the meets and Ant was worried she was going to give birth and the baby would be English, but he managed to get back across the bridge before Aimee was born a couple of days later. We found there house easy enough and presented Elliot and Aimee with a selection box of Haribos each. Made them smile. Was really good to catch up with them after not seeing them for about ten years. How time flys.

We left them after a couple of hours as it’s a busy time for them. We drove along the coast road and had lunch in a new cafe overlooking the sea at rest bay.

Tomorrow we will have a chill out day as it’s our last day here before moving on Monday to Pembrey further along the coast where we will be over Christmas and new year, and only a five minute walk to the beach.

At the end of a rainbow they say there’s a pot of gold. This rainbow seemed to miss us. Maybe next time. 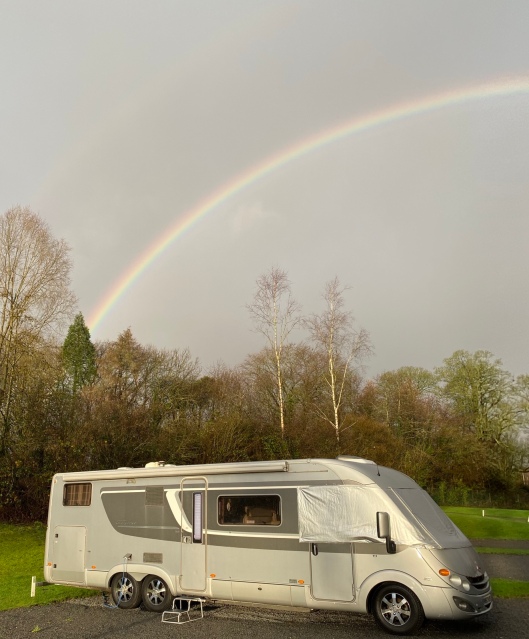