We left Cheddar in sunshine, travelled up the M5 and across the Severn bridge into Wales and it was still sunny. Booked in at Tredegar house campsite. Again one we have been to before but the last time we were here we were working. Not this time. Pitched up and it’s still sunny. All is looking good here in Wales.

While here we wanted to go into Cardiff , round the shopping arcades, castle, Cardiff bay etc. Now the big decision, how do we get there. Bus, takes an hour and costs £9 each, park and ride, your almost there when you drive to get the bus so we thought we will drive in to the city. Check out the carpark prices on line. (Remember Brighton) Well we got a surprise. St David’s shopping centre has a multi story carpark which is reasonably priced. So that was our choice. We left early yesterday morning, well about 9am, it’s only a half hour drive. All parked up in the city of Cardiff by 9.45am. Get the lift to ground floor and that was fun. The lift door opens we squeeze in, there’s about 15 peaple in there. We end up stood next to a dad holding a young lad who stares at me, so in loud voice I announce to him I am not farther Xmas. ( I do have a grey beard for those that don’t know me). Nikki goes bright red with embarrassment and everyone else in the lift roars with laughter. It’s a good start to the day.

We had no interest in the modern St David’s shopping centre, well when I say we I should have said me, although Nikki wanted to see the old arcades so that’s where we headed. The oldest arcade the royal arcade built in 1858. Some of the shops still have the original shop fronts although the things they sell have changed. Most of the arcades are a mix of Victorian and Edwardian buildings which is really nice. Some loverly places to eat as below.

The weather was due to rain in the afternoon and I wanted to walk down to Cardiff bay and mermaid quay so after a couple of arcades Nikki suggested we walk down there while it was fine. She has some good ideas sometimes. Off we go towards the bay. Poor Nikki did not realise how far it was but she stuck with it and we got there. It was a bit chilly with a cool breeze. From the start of the walk you could see the top of the Millennium centre, it got closer the colder Nikki got. Worth the walk though just to see what a great building it is. 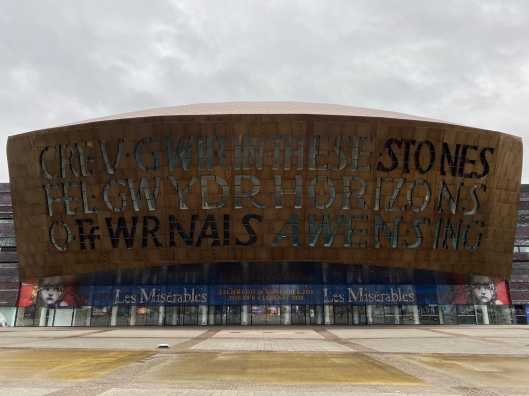 Being winter time a lot the cafes are closed and there is a lack of peaple about which is nice. I wanted to get more photos so walked across to mermaid quay. I love the Peirhead building which was built in 1897 often called little Big Ben. Just the colour and the placing of it are great.

Inside is a museum. By this time Nikki was getting cold and had spotted a Wetherspoons so the decision was made to go for a coffee in the warm. I carried on taking some more photos while she went to get the drinks and find a seat.

Normally the whole of this area would be buzzing with peaple and the pub would have been packed but not today. After our coffee and hot chocolate we started the long walk back into the city. By this time we were getting hungry so we’re looking for somewhere to have some lunch. When I get hungry I get moody so it normally doesn’t take us long to find somewhere to eat. Nikki knows the sign after all these years. We found this really quirky looking cafe so went in. We asked the two girls behind the counter if they do food, yes was the answer menus are on the tables. They managed to say this without even taking there eyes off their phones, amazing really. We sat down, again only one other couple in there. We sat there, we waited and we waited some more. My belly is now rumbling very loudly. What shall we do says Nikki. I am leaving and stand up put my coat on and leave closely followed by Nikki. I don’t think the two girls even realised we had gone. I expect they would have when there phone battery run out.

We very quickly found another small cafe. Run by a Romanian family and what a difference, happy smiley faces greeted us and nothing was to much trouble. Bellys full so off to see the rest of the arcades, there was also a big Xmas market on. Loads of different stalls. I know we don’t do Xmas but when you spot a stall selling the most chocolatey cakes you have ever seen you have to join in for five minutes. Five hours in a city is enough for me and the dark clouds were gathering overhead so we decided it was time to go home. £7 to park which I thought was not bad really. We had a good day, had a nice lunch and walked about six miles in total and as always had a good laugh. Play it again Sam.