While here at Brighton we planned on going into the big town itself. When I say we planned I mean I wanted a new iPad and there is an Apple store in Brighton. Nikki wanted to browse some shops and visit the north lanes.

Saturday was an overcast day so we decided to head into town then. I had googled parking in Brighton and almost fell over at the price of it. As we were going to be about four hours the parking would have been £22 at NCP and about £15 plus at other spots. You will notice I did say would have been. We chose to catch the bus which was £10 for the pair of us on a city saver ticket which meant we could hop on and hop off all day, no keep checking the time. And the buses run every 7 minutes from just down the road. 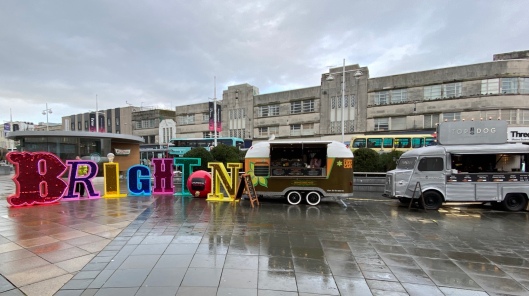 On the bus we found a seat amongst real mix of people. Some say hello, some just stare out the windows, some are miles away and glued to their phones, they are from all different walks of life and different countries. Off the bus and into the shopping centre and find the Apple shop. All very posh and buzzing. I use my iPad a lot and have a lot of photos on it etc so I panic about transferring all the info from one to the other. I made this clear to the young lad who greeted us in the shop. He looked like he had just got off his paper round. I might have been bigger than him but he had the brain and knowledge to help me. So at this moment he was my best friend. A couple of hours later we walked out of the shop with my new iPad all loaded up with my info and an empty wallet.

Next stop was to find the north lanes, after ducking and diving into a couple of other shops that is. The north lanes did not disappoint. It’s full of hippie, record, junk shops etc and some loverly little cafes. Again the range of people is great and I could just sit outside a bar and people watch all day. I suppose if I did that the longer I sat there the range of peaple would turn into the strange of peaple. Me being one of them.

Another thing we wanted to do while in Brighton is go up the British airways I 360. The I 360 is a huge tower, 162 metres high right on the seafront.

You go into a huge glass doughnut so you can walk all around inside. The doughnut goes up to 138 metres and the view is fantastic. It can take 175 guests as long as there not all overweight. Luckily for us there was only about 40 of us on there today. It cost 46 million to build. The whole trip lasts 25 minutes and cost £15 each if you just turn up on the day like we did. You can book it in advance but then if the weather is rubbish on the day of your flight you miss out. We looked at the weather and decided to go today as the sun was out. It’s about an hours walk from the campsite each way and about a 6 mile round trip.

The photos are not very good because of all the glass and reflections but believe me it was fantastic up there. We had timed it just right with the time and the sun out. Even Nikki enjoyed it which I was very surprised about as she is not normally very good with heights. She even enjoyed the 6 mile walk, well she said she did. She will sleep well tonight.

Tomorrow we hitch up the car again and move along the south coast to Wareham in Dorset to another campsite. Another place another view out the window. Another area to explore. Let’s hope we get some more sunshine.