That’s it we have got to the chequered flag. For us this seasons work is over. It has been a good season, a few little hiccups but that’s life. Will we do it again, you bet, to be honest it’s the best job we have had and suits our life style so much. We went into Cirencester for the last time on Monday, I needed a hair cut, Nikki needed to stroll round the shops one last time. No shops just to walk to next year for her. And of course while we were in town we had to go and have a beer and a bite to eat. We met up with our wardens Tony and Jo and had a really good evening. They have been so good to us and the training has been great. Real friends.

Some of the seasonals on site have been so nice. Knocking on the camper door and presenting us with bottles of wine and chocolates. We will miss them, but next year we will have some more seasonals to get to know. One of them Malcolm has been my IT guru the last four days, more on that later.

I managed to watch some of the World Cup rugby while at work and on my days off. Shame England didn’t win it, but they did so well. Got the six nations to look forward to next. That will be a tricky one for me being half welsh and next year we will be working in wales and there is a pub at the end of the road. Who do I support when I go in there to watch it. I suppose it depends on the size of the guys in there.

For the last few years Nikki has been nagging me to get a new phone. My old phone is a iPhone 3 and it still makes calls and texts, that’s about it really but I like it. I also have an old camera which is nine years old now. There are so many times when we are out I just wish I had my camera to capture a picture but it’s to big and bulky to carry around all the time, and my phones camera is rubbish. So the decision was made to get a new phone with a decent camera. So that’s me into the modern world with a IPhone 11 pro. Thats why malcom has been my IT guru he understands these modern things. I am having trouble trying to work it all and Nikki has a sore head with me asking her a load of questions all the time about it. Add to that the internet at Cirencester was not very good so all the photos on my iPad would not go over onto my phone. Well there are 23,995!. I will get to grips with the new toy but I doubt if I will keep it as long as the old iPhone 3.

We left Cirencester yesterday and headed north to Wellingborough to Alde to get the heating serviced. This is us stopped at a service station. All hooked up we are 44ft long so you have to think about where your going etc. The journey went well and the weather was kind to us. 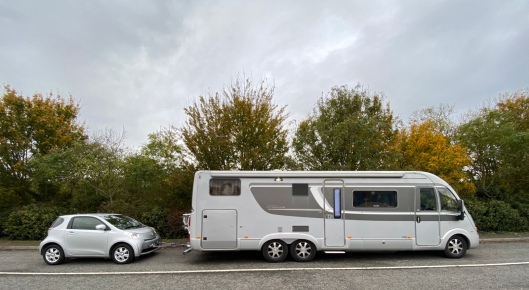 We got to Alde about 3pm and met the guy who was going to do the job today. I have heard really good reports about this place which is why we came here. We unhooked the car and parked up and plugged in the electric and settled down for the night. 8.30 am this morning they took Bertie Burstner into the workshop to do what they have to do. Should be finished about lunchtime so then we will hook up the car again and head for the next stop on our winter tour which is Henley on Thames. 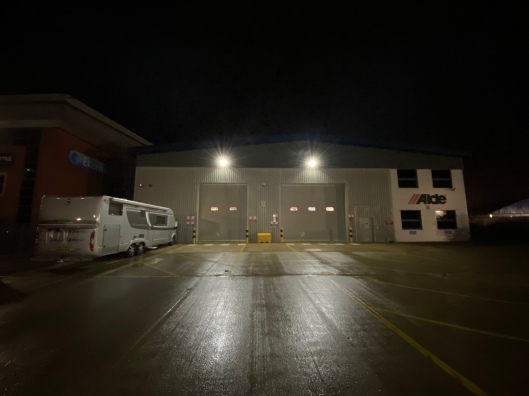