Been a busy few days going here and there. Our friends Rob and Jean who we know from Devon. They stay on the site where we work in there caravan. They have been renting a apartment in Benidorm from a friend this winter. So we arranged to go and see them. We went to catch the 11.40 tram they were going to meet us at the station in Benidorm. We sat there on the station, no tram arrived, well not on our side of the track anyway. Where we catch the tram from is just a small station. An announcement came over the tannoy in Spanish so we never understood that. We could not see any leaves on the track and it had not been snowing. The next tram was due at 12.10 and that one arrived. Talking to some peaple later it turns out the tram had hit a car on the road crossing further down the track. Some of the crossings have barriers some have lights. The one we cross going down to the shops has lights and we have seen trams slow down there because cars are still going, and we have seen more than one car jump the lights and motorbikes.

We got to Benidorm and met Rob and jean and headed for the seafront for a rest, a nice little bar/ cafe overlooking the sea. And a good chat and catch up. Next a wander through the streets of Benidorm towards Tapas square which is a area, well a square actually full of bars and restaurants, every one knows it. We have heard of it but never been. The food and drink deals are crazy. €5 for five tapas and a beer. We sat there having lunch watching the world go by and did more catching up. It was all a bit much for me to be honest, to many peaple and to noisy. But we survived. Next stop was to walk to there apartment which was about twenty minutes away through more streets and bars packed with peaple and trying to dodge the mobility scooters.

Their apartment is on floor eight so has a wonderful view of the surroundings. Which is more apartments and a sea glimpse between them and the mountains in the distance. It has a nice little balcony which catches the sun which is where we sat and had a drink and more catching up. By about 5.30 we were all getting hungry again and they suggested a Chinese just down the road. They had been there before once or twice and said it was very nice, so we strolled off to the Chinese restaurant. They recommended the €5 three course menu, so you get a starter, a main meal and a sweet and a beer or half a bottle of wine for €5 that’s about £4.50 I must admit I was thinking I am going to be hungry when we leave here, but no, the food was fantastic and the portions very generous, enough to fill me up even.

By now it was dark and Benidorm looks totally different at night, the music volume goes up a notch, the bars are even fuller than they were in the day, the karaoke is on, the grannies are all out dressed up like teenagers reliving there youth. The apartment blocks and skyscraper hotels are all lite up in different colours etc.

We walked up through the park called Parque de L’Lguera which is a loverly green area. It’s marble floor and palm tree walkway with lights and fountains each side. There is a huge big auditorium in the middle where they have concerts. They were working in that bit so we could not go through there. At the top is a bullring. 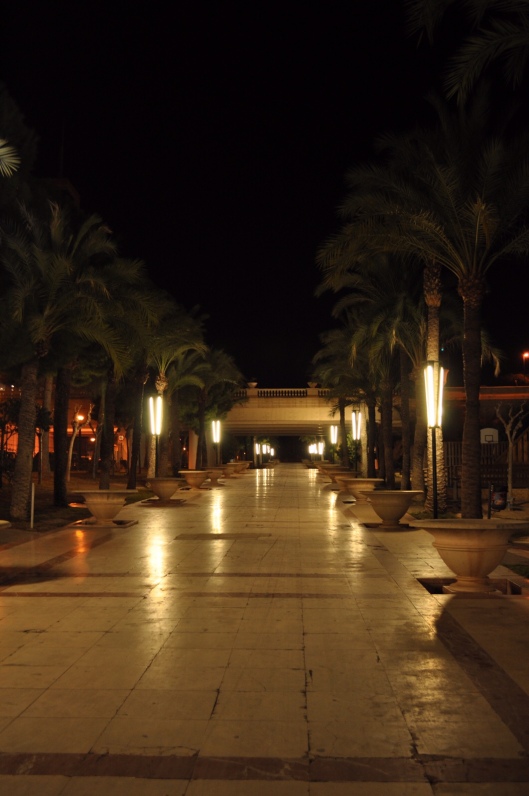 Some other friends on the site we are on now, Tony and Lynne the ones we went to the restaurant with the ribs I told you about asked us if we would like to go out with them again about an hours drive away up the coast to Moraira a nice unspoilt small town by the sea, stopping on the way at a very good fish and chip restaurant. A day out, by the sea, food, beer, great company. Never took us long to make our minds up. The fish and chips was so nice, almost like they had sprayed the batter on and the fish just crumbled in your mouth. Are you getting hungry now. Moraira is a loverly little town and has a loverly marina at one end. We strolled around the boats. Tony used to have a nice boat so he was telling me all about them. We had a loverly ice cream sat overlooking the marina to finish the day off.

Our next trip out is to Alicante on the tram, something we wanted to do last time we were here but never seemed to find the time. We have only been here for nine weeks now so should really do it. And I must tell you Nikki got very upset the other day when we went shopping. Her favourite red wine she drinks that cost 99 cents had gone up to €1.20 A twenty percent increase. Life will never be the same. I had to take her home and sit her down and give her a drink……….of here favourite red wine.

2 thoughts on “Here and there”