We wanted to go to Alicante last winter when we were here, but we only had a month here last winter so never got round to going. Before we left the UK I made a list of things we wanted to do this winter while we were here for three months this time. One of those things was to go to Alicante on the tram and go up the castle. It’s taken us nine weeks but we have done it. We caught the tram at the station we normally go from if we are going to Benidorm but this time we were on the other track going the other way, south instead of north. And this time the tram arrived and on time. It takes about an hour to get to Alicante stopping at various places. The mostly single track winds it’s way along the coast so you can always see the sea and the loverly houses which have a view to die for.

Alicante is the second largest València city. It’s a city port. The castle which we wanted to visit castell De La Barbara is situated on mount Benacantil overlooking the city and the port. The tower La Toreta is 166 metres above sea level. When we got off the tram we had to find the way into the castle. The Spanish are not very good with there sign posts. I had looked on google earth and could see various paths but none of them actually led to the right place, they just seemed to fizzle out in the middle of nowhere. We found the road that leads up to the top but did not want to take that. I knew there was a elevator around the other side so we walked around and found that. Can you believe it, hundreds of years ago they built a castle to protect there city and even put a elevator in so you get up to the castle from sea level. At the top is the oldest part of the castle. Some of the lowest zones and walls were constructed later in the 18th century. On the slopes of the mound/ castle they have found archaeological remains of the Bronze Age, Iberian and Roman. But the origin of the fortress is in the late ninth centuary with the Muslim rule. The views from up the top are fantastic and when you stand up there looking down and imagine them bringing all the stone up there to build it etc. And not in the elevator. And then standing there with there guns and the canons ready to fire at anyone who dares to come up there. We had lunch in the cafe up the castle, overlooking the sea before going onto our next stop. 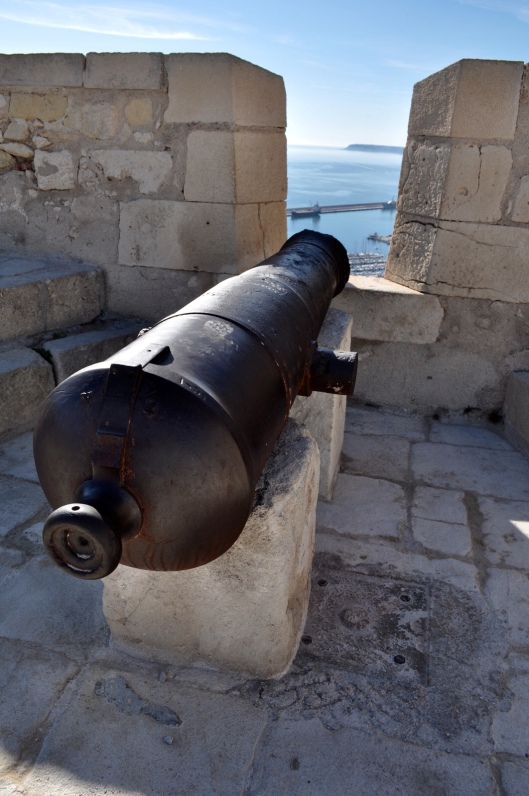 Another thing we wanted to see was the promenade down by the marina. The marina does have some very nice boats, starting at one end with the smaller ones and as you go further along they get bigger and bigger and the price tag rises also. The promenade is lines with palm trees and the marble floor is made up of 6.5 million marble floor tiles. Took me ages to count them for my research. When you look at it it looks like it’s in 3D almost, very impressive.

The last place we wanted to see was a wacky street we had been told about. It’s just a street with some weird and wonderful shops in but all along the street are these big mushrooms with bugs on top. Not your average street.