Well I can’t believe we have been on this site now for two months. The time just flys away. I am sure the time in Spain runs different to back in the Uk. When I am at work it never goes this quick. Nikki’s foot is a lot better but still not right. She can walk down to the beach and back as long as she takes her time and has a coffee stop. The E bike that we have ear marked for her when we get back has good reviews etc and luckily we saw one on site so we’re able to have a good look at it and ask the owner all about it and what she thought of it. She highly recommended it, so that’s The one we will get for her when we get back. My bike will be serviced as it’s not working right at all. I also have an E bike earmarked for me but that can wait.

We have lots of friends on site here and one couple Tony and Lynne were telling us about different places in the area etc. They have been doing this for years. They said about a restaurant up by the dam which I have passed on my bike.They told us about the sticky ribs etc. They offered to take us up there one lunch time, so a time and day were set straight away as I was licking my lips and dribbling at the thought of these ribs. The guy that works in there was a real carecter and made us laugh so much. Nikki ordered scampi and I ordered a salad. The salad was to go with her scampi. LOL I ordered the sticky ribs and a beer and some wet wipes. Well what can I say apart from those ribs were some of the best I have ever had the fortune of eating. Did I eat them with my fingers, did I get the sauce all over my hands, did I get the sauce in my beard. Yes. I even let Nikki try one. She caught me on a good day. She enjoyed her scampi also.

Yesterday we went for a walk down to the sea, then said our goodbyes as I wanted to go for a coastal walk which would be to far for Nikki. She was ok to walk back. I had looked on google maps at the coast line and could see a couple of ruins so wanted to check them out. I love old buildings wether they are still intact or they have been left to just fall away. If I can get inside it’s even more exciting. The coast here is beautiful and as I climbed up and down the many paths on the barren land I could see my goal. This old house was on the way. Not much of it left now. 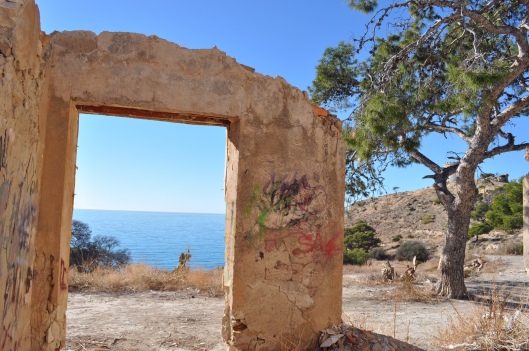 Villa Giacomina was built around 1910 so not very old really. Built by Dr Alfonso Esquerdo I suspect in between seeing his patients. He married Giacomina Bellami and they lived in the house untill 1922 when Alfonso died. Properly coud’ent find a doctor because they were all building houses. It’s historicist architecture I states Medevil, Arabic and gothic style. At the end of the civil war Dr Bastos who was the head of traumatology at the Swedish hospital of Alcohol lived there. After the war it was occupied by the Italian Littorio division. Currently the city council develops a research and recovery programme of the building. But it looks more like the graffiti artists and vandals are doing more work on it. Real shame.

The second building I wanted to see was a small tower not far from the house. Standing on the highest point of the land overlooking the sea from both directions. This was built by the famous psychiatrist and head of the Republican Party Jose Maria Esquerdo who was Alfonso’s uncle. It was built as a private study. No computers or lap tops here but what a great location to sit and work from. Again the graffiti artists and vandals have moved in.