Now if I had a euro for every time I have said watch out on this trip I would be staying out here a bit longer. Now your all wondering, what is he on about now, has the cheese slid off his cracker, has he finally lost the plot due to to much sun. Everywhere you walk in Spain, France or Portugal there is dog poo. They just don’t pick up after their dog. Well some do, but most don’t. I know it’s bad in the Uk but not as bad as Europe. And it’s not the dogs fault, it’s the owners. So as we walk off down to the beach or town to the Chinese shop, supermarket etc it’s like a obstacle cause with me shouting WATCH OUT as weave our way around the poop piles, some small, others bigger. That’s enough of that dirty talk now.

Over the back of our pitch here are olive trees and barren ground. The amount of different birds I see in there is amazing. Blackbirds, sparrows, blackcaps, redstarts, Black redstarts, Siskin, and even on rare occasions a hoopoa. the other day when we came back from the shop, sat on the fence singing away was what looked like a white sparrow, grabbed the camera but to late he had flown away. The next day he was back, hopping about on the ground eating. I managed to get some photos of him this time and relized he was a canary and must have escaped from his cage. Going back to the Hoopoo, no we’re not talking about the dogs and Chinese shop again. HOOPOO he did that one over there, no not him hepoo no Hoopoo I don’t know Hoopoo. The Hoopoa is a mistle thrush sized bird found in Europe and sometimes seen in the south of England in the spring while on there migration course. Beautifully coloured with a long bill and a crest on there head which stands up when they are excited. Wanted to get a photo of one but you don’t see them that often. Well the other day one landed and was searching for food on the ground, they eat spiders and grubs etc and dig in the ground with there long bill. Got the camera out and stood very still and reeled off a few shots. He was very obliging coming even closer and at one point even sitting down in the sun for a small nap. He was not very excited about having his photo taken though as he never raised his crest. 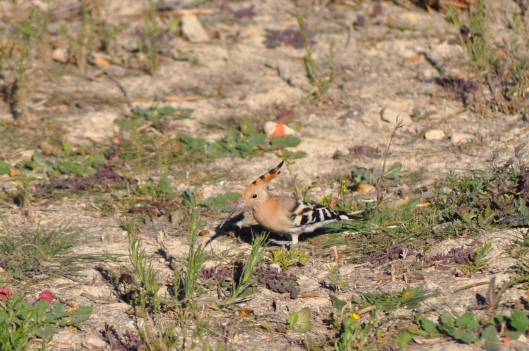 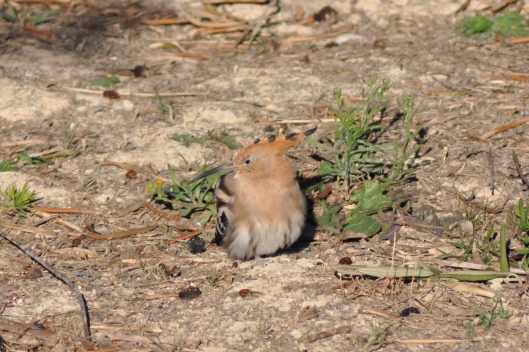 Before we came away I dusted off my 25 year old mountain bike to bring with us. I wanted to be able to get out a bit further than just walking. We both did to be fair and the idea was to buy two E bikes but lack of funds put that on hold until next year. Nikki was ok with me bringing mine and her running along behind. No not really. She does not do running, even a long walk is painful for her hips and feet. So before we come away next winter we are going to get her a E bike. I have not used my bike for a long time so my bike fitness is very poor but I go out for small rides now and then. I used to bike a lot and am getting back into it now. Although not as mad as I used to be when I used to go up on ex or every weekend and hurtle down the hills at stupid speeds. I checked out google maps as I knew there was a reservoir not to far away and wanted to go up there. You can cycle to it with out going on many main roads which is always nicer. Took me about half an hour to get there. The reservoir is called Embalse de Amadorio It’s the closest reservoir to the sea in all of Europe supplying all of Benidorm and surrounding areas. It’s not very full at the moment considering it’s winter time which is when it mostly rains and fills up. It was really Erie up there, nobody about. In the summer it would be packed as there are lots of nice picnic spots all around, loads of paths shooting off all over the place. A road runs all around it up and down through the hills but the road is fenced off so you can’t get through with a car, only a bike or walk. My aim by the time we leave her is to be able to cycle from where we are staying all the way up to the dam and around it and back. Will keep you posted. You go through a tunnel to get on the main dam wall go across and a tunnel the other end takes you to the start off the road. Lots of graffiti on the walls as usual in Spain. I noticed a couple of good points to get some photos so cycled up into the tunnel. Found the archway, covered in graffiti, dark and Erie. As I stepped into the archway and started to take photos I could hear footsteps and a voice. I had not seen a single person. Am I going to be mugged and thrown into the dam and my 25 year old bike stolen. I stepped out of the archway and saw this scruffy unshaven man approaching me with two dogs. I smiled and said Ola and he walked on by. Lucky for him, I like my old bike and the water looked cold. 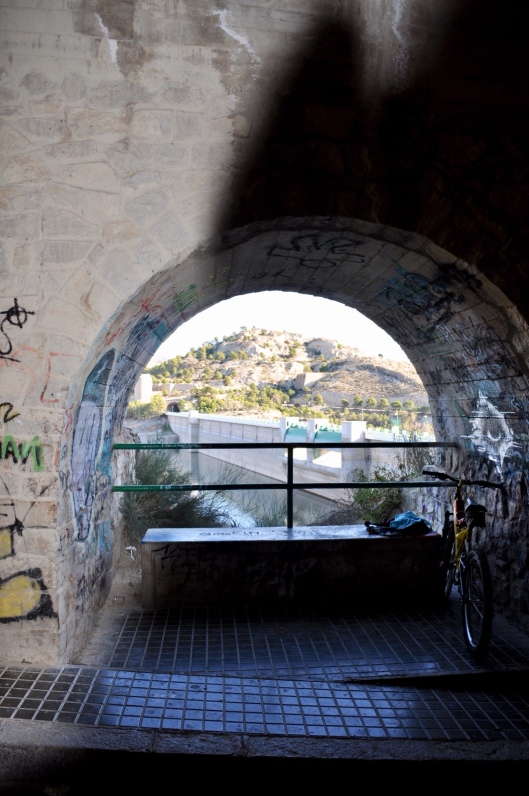 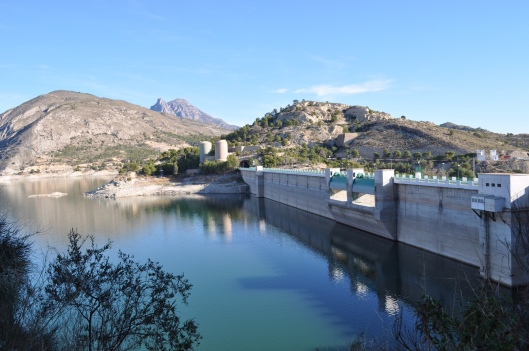 So that’s us to date. As we don’t do Xmas we both wish you all happy holidays and hope you have a good one and it’s not to cold. We will have a walk down the beach in the sun and if it’s to hot take shade under a palm tree. Until the next time. WATCH OUT.

2 thoughts on “Watch out”