We were due to leave Brighton and head for Henley on Thames on the Saturday but decided to extend our stay there an extra couple of day’s. The route from there was all motorway M23, M25, M4 so a boring journey. It’s an easy journey with our outfit but so boring and I hate the M25.

The six nations rugby also started on the Saturday which I always like to watch, although this year was not a good start for England, but we won’t talk about that.

We got to Henley on the Monday again in glorious sunshine. I must say the weather has been ok this winter for us. Mild and some loverly sunny days, although the temperature is not as warm as Spain or Portugal. And the beer is certainly not as cheap here. Tuesday Nikki’s eldest son came over with one of the grandchildren so we went down to Wetherspoons and had lunch. Wetherspoons never fails really, you know what your going to get, cheap beer and pub grub.

This truck conversion was also on site. Not to everyone’s cup of tea, it I love it. I could just see us down in Morocco in that parked up by the beach. Me surfing and Nikki sipping her wine under the sunshade and reading her book. That truck would get me to places other motor homes could only dream of. 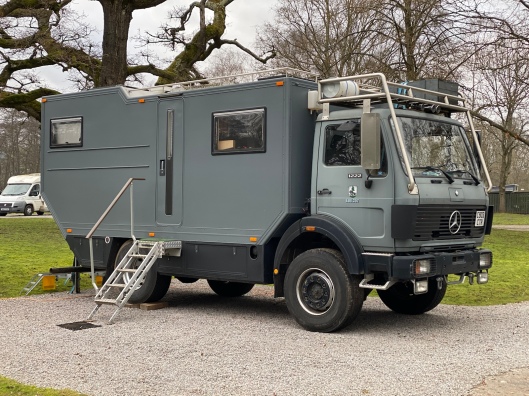 I really needed a hair cut so the next day we walked back into Henley, I went into the barbers and Nikki walked right up the other end of town to a wool shop. I told her to wait until we get to wales where there will be plenty of sheep to get some wool from but she went anyway. After my haircut and her wool shopping we met up and decided to have lunch out again, spoil ourselves because our holiday time is running out. There is a pub in Henley called the Bull which we have been to before and really liked it there. So the decision was made, lunch at the Bull. And very nice it was. I loved this writing on one of the walls.

So today we hitched up headed for a campsite called chapel lane, just south of Birmingham. Not far from a small town called Hollywood, and you all thought we had got on a plane to go and see the stars. Loverly old Abby building near the entrance to the site.

And the blue sky is real. A ten minute walk away from the site is a farm shop and we had to go and check it out. We could have spent a lot of money in there but resisted. Only just though. They have a cafe which I am not going to be able to resist because they do a loverly full English breakfast. We are here until Monday when we hitch up again and head for Chester. I need to get the levelling jacks serviced and that’s about half an hours drive from that site. More expense but it has to be done.

This is where We would like to be sat right now, a nice pint of real ale, a large glass of Merlot for Nikki and let the day drift away.