As the title says sun, sun, sun, we have had such a good run of lovely weather here in Villajoyosa. And what do you need when the weather is hot, you need some shade. What do I have on the side of the camper, a sun shade….that broke last February when we were here. What did I not fix this summer. Yes you got it in one. I bought the new bit, the gearbox winder but just never got round to fitting it. I got put off by people saying it’s a nightmare of a job to do. The other day I thought, it’s calm, sunny, I have nothing to do I will look at it. Managed to get the end cap off and and work out how it all goes only to discover that there is another part that is also broken, so I put it all back together and put it on my list of jobs to do next year, or to be more precise a job for the professionals to do next year. Luckily as I was wandering around the campsite, there outside someone’s camper was a sun shade for sale. Nothing like the one we have attached to the camper but one that you can just attach when you want it. Talking to the guy he said it was brand new, he cannot put it up on his own so it’s for sale. €40 offered him €30 about £27 and it was mine. Walked back to our pitch and put it up. Bargain and some shade for Nikki. Brand new it would have been £110. So that will keep us shaded now, don’t want my beer getting too warm.

A couple of days after that ride I went out on my own to the reservoir Embalse De Amadorio to take some photos. The light was good and the reflections were great. 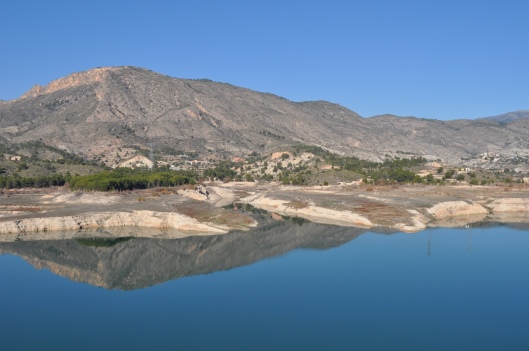 And of course I had to take photos of my new bike in the climate it likes. 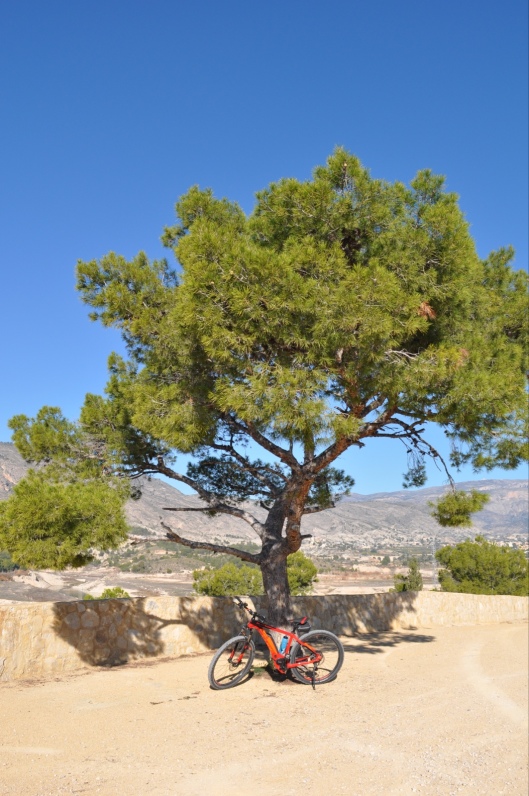 Our friends Jeff and Jan, the ones we went out for coffee with the other day said about going out again to a great fish restaurant they know in Benidorm. So we checked the wallet and decided, what the hell we’re on holiday let’s go for it. Not a big fan of Benidorm but ok to dip in and get out. We caught the tram in which takes about 15 minutes and then walked down the hill from the tram to a little cafe for the first stop. Jeff and Jan love Benidorm and because they live out here know all the good spots to go. The restaurant we were going to was called Las Gaviotas, Very popular with the spanish so much so if you don’t get there before 1pm you have to queue so we knew it was going to be good. We got there just before 1pm so had a choice of seats. I told Jeff we should sit next to the windows because that way you get bigger portions because when people are walking by they look in and think wow look at that let’s go in here!

The food was fantastic. So this is what we had. Tostadas which is toast with Alioli and tomatoes on it, a huge salad plate and the main meal the fish platter, which consisted of a variety of fish covered in tempura which is a light batter. Now your licking your lips this was all washed down with a couple of bottles of wine and a Diet Coke for me. By the time we were half way through our meal the queue was already out the door. And all that for the four of us came to €45 just over £40.

We left there to go to a hotel for a drink where Geoff wanted to show us the view from the top. The hotel is called Hotel Madeira. It has a lift on the outside made of glass so as you go up you have this great view of Benidorm. Out the lift and to the bar and out on to the terrace. WOW what a view. Ok you pay a bit more for your beer and wine. When I say a bit more I mean another fifty cents per drink. Well worth it. Shame the light was not brilliant, slightly hazy but still nice. 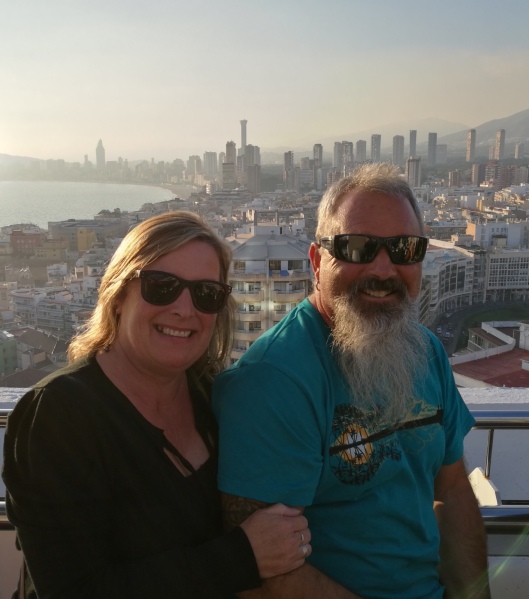 Out the hotel and head for the tram home, one more stop in another spanish pub for a beer and a couple of games of pool. A great time was had by all. And no bad heads today. Apart from mine in that photo, god I need a haircut so bad. Something to do next week.