We left the campsite at Le Mans on a cold but dry morning after saying goodbye to owners and wishing them all the best for the future. They have got a lot to do on the campsite but will be very rewarding. I would love to be in their shoes. Have always wanted to own a campsite, I know it’s hard work but talking to peaple that travel is so interesting. Our aim was to get just north of St lo which leaves us about an hour up to the ferry port from there. The sun was out the roads clear, although there was snow forecast but we should be ahead of it. We stopped at a supermarket on route to buy some wine, cheaper than buying it in the Uk, and a couple of other bits to see us through. 55 litres of wine later and a loaf of bread we headed for our last aire beside a river in St Fromond.

The next morning we woke to a dusting of snow but there was no panic as the forecast was for sunny day and snow further up north. It started to snow about 10 am so we decided to head on to cherbourg, at least that way we were at the port. An hour later we arrived at Cherbourg after driving through some really bad snow and the roads were, shall we say quiet bad with snow and the side roads were even worse. We had a long wait, about six hours before we sailed at Cherbourg. Too long really because it gave Nikki too long to think about the forecast rough crossing. Storm Emma was here along with the beast from the east. Onto the ferry and off to find a seat. An hour later Nikki wanted to move as the ship was doing some really weird movements and making some weird noises. We opted to sit in the middle of the ship, thinking that’s where the reception is so must be the best place and the middle of the ship will have less up and down movement. All was going well until a bloody great big roll from side to side and things crashed off the shelves in duty free and pots and pans went everywhere from the kitchen. Nikki’s face was a picture. Later we had a message over the tannoy to say we will be late docking due to bad weather.

We had already arranged with the campsite just outside Poole that we would be late. No problem they said you know where to go. We got off the ferry to very snow covered ground, and slowly but surely drove to the campsite. It’s only about 5 miles away but the roads were really bad. No traffic about, not surprised really, everybody was tucked up in the warm. Not good to be out in a car let alone a five ton 30 ft motorhome. Nikki never said a lot from the dock until the campsite entrance. No one had been on the campsite so it was just like a blanket of snow, so as I drove along through the snow towards our pitch rounding a bend and onto our pitch leaving only tyre marks behind us. Engine off plugged into the electric and off to bed. The next morning and looking out the window was so weird. It had snowed, then rained, and then froze so it looked like a ice rink out there. 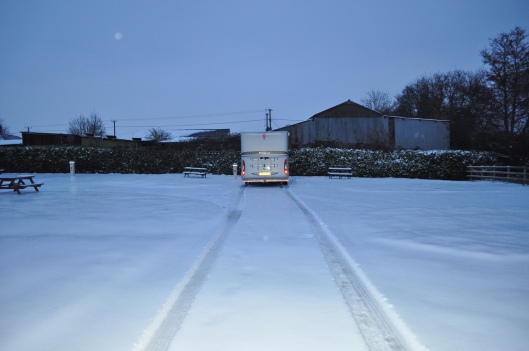 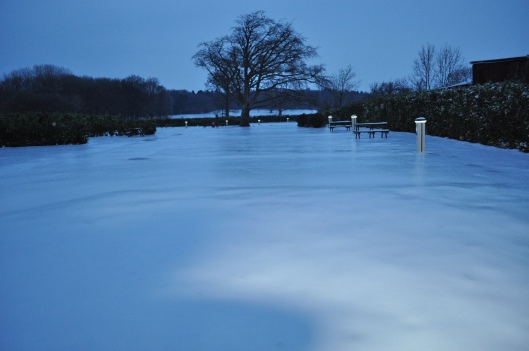 We were not going anywhere soon. The plan was to stay here for a couple of days and then move on. Today is Sunday and all the snow has gone, so in a couple of days we will travel back to Devon ready to start work and save up for next winters trip. But before that we need to get our E bikes to make the fun in the sun more enjoyable and a new sat nav so we can find places easier. And of course drink all the wine.

2 thoughts on “The final push”