The ST Anthony festival is celebrated in Spain on the 16/17 January. It’s an ancient festival of pagan origin. It’s about burning the devil and blessing pets, with horse processions. All over are bonfires with devils ready to be burnt. In Benicarlo the main fire is built in the square by the church. That’s the church in the last blog post. There’s not a lot of room to have a huge bonfire and a lot of people, but people of Spain don’t seem to worry about things like that.

On Monday we decided to go for a walk along the sea front and then up to the church to see if anything was being prepared. It was windy but the sun was out so very pleasant strolling along in the sun with the sea glistening and the palm trees swaying in the wind. Do you get the picture. 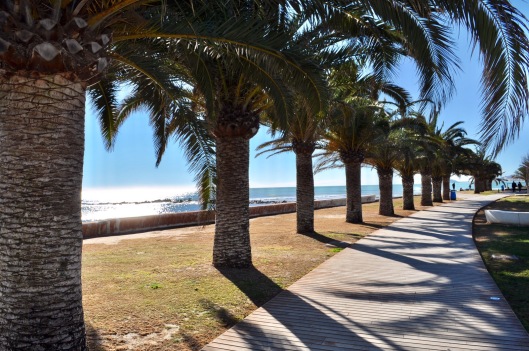 We got to the main square in the town with perfect timing. The bonfire had been built ready for the evening and they were starting to get the devil strung up above the bonfire. This was done by two guys up in the church tower and another two on the roof terrace of one of the houses. A lot of shouting and pulling of ropes and the devil was above the bonfire. They were also letting of rocket fireworks. I don’t think it was a Heath and safety issue to see which way the wind was going, just an excuse to let them off, as the Spanish do seem to like to let fireworks off. Oh look the suns out let’s let a firework off, my mums going shopping, great let’s let a firework off. Even one of the young girls got in on the act. The rocket is placed on a piece of wood which has a handle on it and is held at arms length and off it goes. None of that put the rocket in a bottle light it and run like hell. 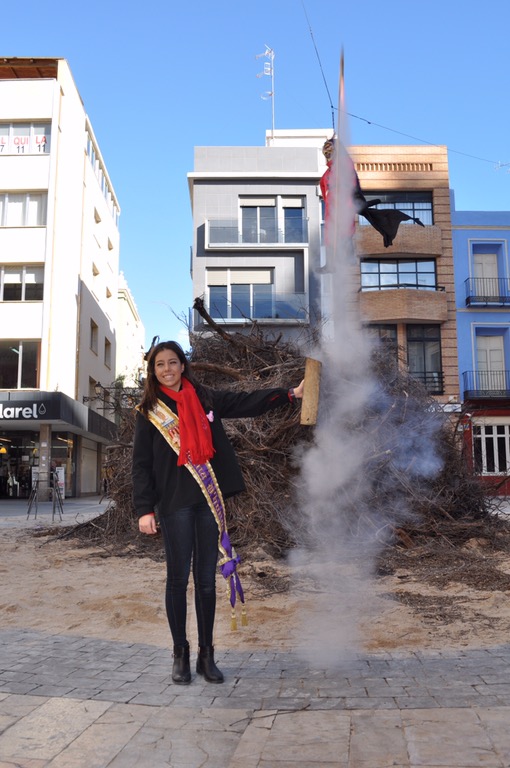 We left there and wandered up through the town laughing at the way they do things. Can you imagine what would happen in the UK if you said you were going to build a bonfire in the town square and get everyone to come along. We never went down the town for the main event, and the town is still there so everything must have gone to plan. They are also celebrating the Artichoke, this is another festival which goes on through January and you can see all over the town Artichokes being roasted etc. And I expect there will be a firework or two go off.

Now let’s talk about the weather. I know you guys in the UK have had some bad weather, rain, snow and wind. Well don’t think we have sun all the way. We have had a cold wind now for a few days and rain is forecast tomorrow, and that’s the first rain for about six weeks. South from here yesterday they had snow at Denia and inland from there about 15 miles, which was according to reports the first snow for 35 years. All the locals are saying it’s the coldest, wettest winter for years. There hope that makes you feel better now.